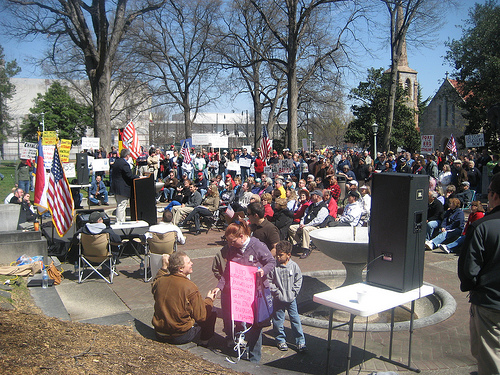 Community organizers of a different stripe gathered in Raleigh this weekend to display their anger about the stimulus, big government and ever increasing taxes.  The movement known as the New American Tea Party flooded the grounds of the state capitol with a coalition of conservative groups.  A crowd of about 300 got a steady stream of quotes from our founding fathers in rousing speeches as well as pork of both the spending and BBQ kinds.

Thomas Jefferson made an appearance along with several revolutionary flags all that shared a common trait: Rattlesnakes with the motto of "Don't Tread on Me!" which also became the chat of the rally.  Some inspired soul even brought out a couple of pitchforks and, fittingly,  a manure fork.

By the end of the rally, citizen activists vowed to get involved and make their voices heard by their lawmakers at the local, state and federal level.

Some photos from the rally can be found on the web here.