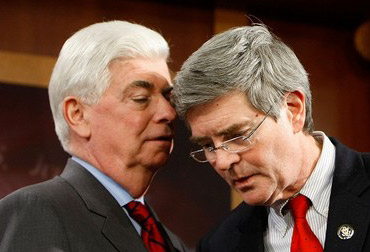 Barry Smith, Capital Correspondent for Freedom Newspapers has a piece out today about the effects of North Carolina's growing population on this state's representation in Congress.  We could be in line for another seat in the U.S. House of Representatives after the next census.

Barry brings up the point that the fighting over redrawing the district lines could get ugly.  Like it did back in 2002, 2003 and 2004.  You could have another situation where a member of the redistricting committee decides that not only would he like his own seat in Congress, he'll draw the lines so dramatically that he really won't need to campaign too hard every two years.  All of this speculation is hypothetical, of course, and should bare no resemblance to any current members of Congress from Raleigh named Brad Miller. (That's Miller in the pic conferring with Sen. Dodd of AIG bonus fame.)

When politicians use their power to plan a promotion and select their voters, we need to be worried about the state of our democracy.  Voters should select their representatives; not the other way around.

Smith is right.  Population can cause a lot of trouble.

BTW, you can can Barry's live act at the Civitas Poll Lunch this Thursday.  Click here to register for the lunch.