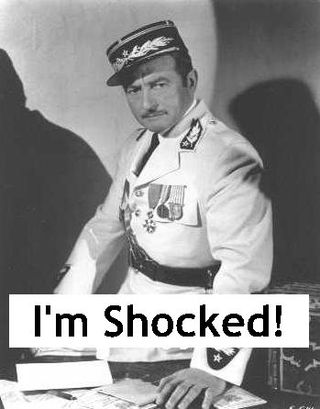 One of my favorite cinematic metaphors for politics in North Carolina is the scene from Casablanca in which Claude Rains is ordered by the Nazis to shut down Rick's. He says, "I am shocked, shocked to find that gambling is going on in here!" as he pockets his winnings.

The same applies to public officials and voting fraud in North Carolina.  The Fayetteville Observer has the story of a vote buying scam in a city council election in Lumberton.  Votes were apparently bought with nothing more than a $5 coupon to a diner.  That race resulted in a tie.  During the 2nd election the alleged coupon candidate was defeated.  Another interesting point of the investigation by the State Board of Elections was that early voting was the target of the fraud.

Despite the dismissals by the elected officials that really run this state, voter fraud does happen here no matter how "shocked" they appear to be.