Have you ever wondered about the difference between North and South Carolina?  Despite what the Charlotte Chamber of Commerce would have you believe, they are a considerable number of differences between the two.

South Carolina has always been a hotbed of conservatism while North Carolina's citizens just think they are conservative.  The truth is that the electorate has been constantly fed a steady stream of disinformation by the liberals in power.

If you really want to know the difference, you need to look no further than the state's choice's for license plates.  South Carolina is now taking orders for a new plate for Christian believers.  (Don't worry haters of faith on the left, they also have a plate for secular humanists as well.) 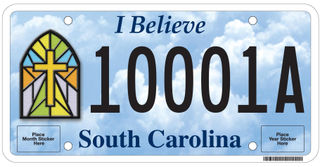 Meanwhile, North Carolina's lawmakers can't seem to find the time or will to authorize the now ubiquitous "Choose Life" plate. (22 states already have it, including the conservative bastions of Maryland, Connecticut and Haiwaii.)

Don't get me wrong, North Carolina legislators have no problem passing bills to authorize new plates.  There are currently more than 180 authorized special plates for the public. (The number is really north of 500 since NC high school fans can also get their own plate, though none have reached the required number of requests.) Somehow, North Carolina's lawmakers did let the "In God We Trust" plate pass.

So, while your neighbors in Florence, Ft. Mill and Conway can display their beliefs on their bumpers, North Carolinians can have NASCAR and their favorite college, but hold the personal views.