As a conservative Catholic I’ve watched the debate over President Obama’s upcoming commencement address at the University of Notre Dame.  So you thought there were only two sides to this issue?  Think again.   Richard Kahlenberg, writes in the online edition of American Prospect , one of larger mouthpieces for American liberalism,  the following:

Conservative Catholics have been berating Notre Dame for extending a commencement-speaking invitation to a pro-choice president. We agree that President Barack Obama shouldn't speak at Notre Dame — but abortion has nothing to do with it. Notre Dame practices pervasive discrimination in its admissions policies. Every year the school reserves 25 percent of the seats in its entering class for children of alumni. These "legacy preferences" result in applicants being granted or denied admission based not on their merit but on their ancestry.

Kahlenberg  rants against the school’s legacy admissions policy and how it conflicts with America’s egalitarian impulse.  I disagree, but that’s not the point.  You can read the story online (here).  My point, look to right side of the snapshot bleow . Who sponsors this little screed against Notre Dame?  University of Notre Dame Online.

<>Oh the wonders of technology. Sometimes being able to track advertising to every article that mentions your name isn't a good thing. Another dropped ball by the Irish. 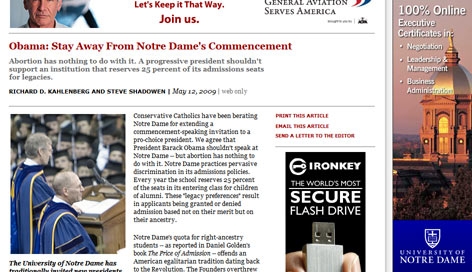 P.S.  Yes, Wake County residents you have heard of Kahlenberg before. He’s one of the national gurus Wake County Schools trots out to argue the merits of school reassignment. Interestingly, Kahlenberg  who resides in a tony suburb of Washington DC doesn’t dare afflict his own kids with his policies. I’ve been told several times his children attend private schools and do not have to worry about being bussed miles to an “economically integrated” school.