Rob Christensen in this article takes the typical progressive debate tactic of completely mischaracterizing an opposing viewpoint, and then addressing that conjured up caricature rather than the actual arguments presented. 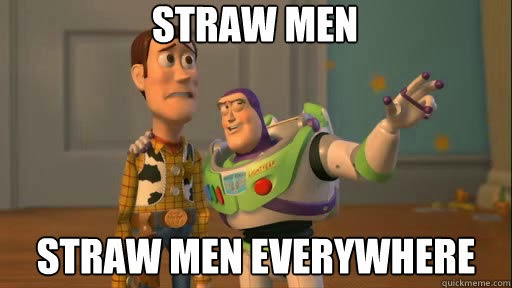 In this case, the topic is unemployment insurance. In an article discussing a potential bill that would require unemployment benefit recipients to make five contacts inquiring about work per week – an increase from the current mandate of two per week – Christensen yet again plays “slay the imaginary straw man.” First, the conjured up caricature:

There is also a view among some conservatives that unemployment insurance is, in the words of the Civitas Institute, “paying people not to work.’’

There are apparently some people who believe the American worker is a slug just waiting for a chance to sit on his or her duff.

Notice the leap he takes. The first part is true, I have described unemployment benefits as “paying people not to work.” By definition, that’s what UI benefits do. But to somehow conclude that making such a true statement transfers to a belief that “the American worker is a slug” is ridiculous.

By stating that UI benefits pay people not to work, we are merely underscoring the fact that incentives matter to human behavior. The old adage goes: “the more you subsidize something, the more of that activity you will get” rings true. Lobbyists for renewable energy get paid a lot of money to exploit this fact of human action. More subsidies for solar farms means more solar farms. In turn, more subsidies for unemployment means more unemployment.

Providing someone with, say $300 a week in UI benefits for zero hours of labor makes working 40 hours a week for, say, $350 a week far less attractive, relatively speaking. The marginal benefit comes out to $1.25 an hour for taking the job.

Moreover, there is plenty of scholarly evidence to back up what is basic common sense. I guess Christensen believes that former Obama economic advisor Larry Summers simply believes the American worker is a “slug” when Summers concludes: “The second way government assistance programs contribute to long-term unemployment is by providing an incentive, and the means, not to work. Each unemployed person has a ‘reservation wage’—the minimum wage he or she insists on getting before accepting a job. Unemployment insurance and other social assistance programs increase that reservation wage, causing an unemployed person to remain unemployed longer.”

Christensen is either too lazy or simply intellectually incapable of refuting the actual arguments that don’t fit his narrative. Instead he goes down the well-worn path of arguing against a false narrative that he himself conjures up.