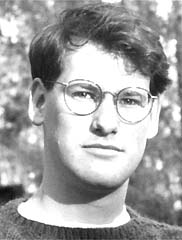 Some days after the 9/11 attack, news began to filter out about just who some of the victim’s were.  I was shocked to learn that one of my classmates from high school in Durham had been aboard American Airlines Flight 11 from Boston.

Karleton Fyfe was one of the funniest people I have ever met.  He had a dry wit that made you think and then laugh.  At a staggering 6’5, you couldn’t miss him.  Without a doubt, he was also one of the smartest graduates to come out of Durham’s Southern High School.  He went on to graduate from UNC and worked for John Hancock in Boston.

When you think about 9/11 this year, think, for a moment, about Karleton Fyfe and then remember his wife, Haven, who went to school here, and their young son Jackson.

If I ever get the chance to meet Jackson, I would love to tell him stories about this crazy guy who was probably the tallest kid at my school.  I wouldn’t be surpised to see Karleton’s son tower above the crowd too, in more ways than one.