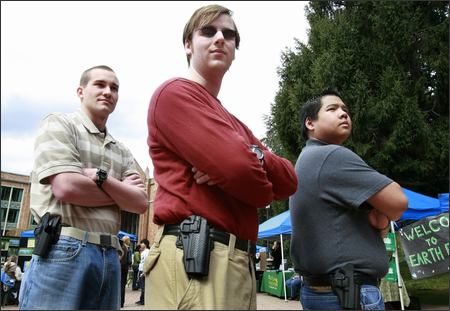 Students at NC State University last month held a clever little protest where they wore empty holsters on campus to call attention to the vulnerability of so called "gun free" campuses.  After the massacre at Virginia Tech, students want to know why they can not lawfully defend themselves against an armed attacker.  The universities have, in effect, become a soft target for the killer who only wants to end as many lives as possible before taking his own or going down in a hail of police bullets.

How different would Blacksburg been if students were armed?  We don't have to guess what would have happened because it did happen.  Five years before and only 130 miles from the Virginia Tech massacre a killer was stopped in his tracks by armed students that had retrieved guns from their cars.  The Appalachian school of Law in Grundy, Virginia (Bev Perdue's hometown) was the scene of an on campus shooting that was stopped by armed students.  (Needless to say, the media wasn't quick to tell the story.)

But, if you are a student that would like to see legally carried guns on campus, you might want to keep that proposal to your self.  A student in Connecticut laid out his position during a class project in his communications class as was promptly reported to the university administration as a violence risk and questioned by campus police. UNCW's professor Mike Adams has the details.

We used to have a concept in this country known as criminal intent that tended to keep honest people from being charged with gothcha style justice.  What ever happened to that idea?  Hang in there Holster Boys!  Common sense may appear on your campus one day.