Once again, the media and the government have over sensationalized a non-issue with this swine flu panic and “epidemic.” Why would I call it a non-issue? The Centers for Disease Control told me. Well, not directly, but I did take a peek at their webpage on influenza.

“Each flu season is unique, but it is estimated that, on average, approximately 5% to 20% of U.S. residents get the flu, and more than 200,000 persons are hospitalized for flu-related complications each year. About 36,000 Americans die on average per year from the complications of flu.”

Thirty-six thousand people die from garden-variety influenza. There has been 91 cases of swine flu and only one swine-flu related death in the United States (and this was a Mexican citizen). I am not sure this could warrant a comparison between the two.

There is, however, a message to be learned throughout this debacle. I can only say that we must always investigate any supposed pandemic brought before us by the media and government, generally as an excuse to “temporarily” increase government size and spending.  It’s not a crazy conspiracy, it’s just politics.  As Chief of Staff Rahm Emanuel has said “You never want a serious crisis to go to waste.” Think about that the next time you wake up and debate donning a surgical mask on your commute.

Below: A fearless young lad defies the CDC’s warnings. 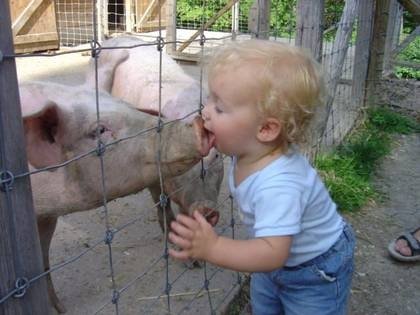